James Washington: Analysis of the Brief Career of the Young Wide Receiver 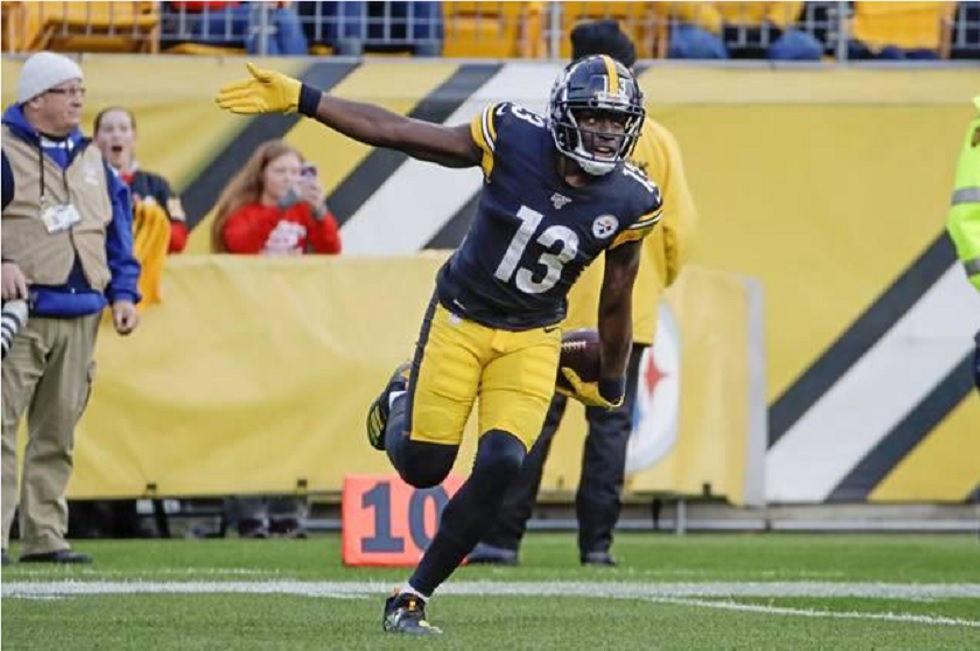 James Washington is a young American Football player who plays the wide receiver position for the Pittsburgh Steelers franchise in the National Football League (NFL). James Washington was drafted in the second round (60th overall) of the 2018 NFL Draft by the Pittsburgh Steelers. He was the seventh Wide Receiver picked in that draft. His teammate from his days at the Oklahoma State University, quarterback Mason Rudolph was selected by the Pittsburgh Steelers in the third round of the same draft. Like most wide receivers of the Big-12 Conference, James Washington ended up having a disappointing rookie season. But Washington dug deep, worked hard and bounced back to a solid sophomore season with the Steelers. He improved massively in areas such as route running and footwork. Despite the Steelers missing their legendary quarterback Ben Roethlisberger, the Steelers managed to pay decently in the season and James Washington was a big reason behind that. He finished with 44 receptions for 775 yards and four touchdowns. The fact that he was catching passes from replacement quarterbacks Mason Rudolph and Devlin Hodges, made his performance even more remarkable. One can safely expect that when Ben Roethlisberger returns from his injury for the 2020-2021 season, James Washington's numbers will shoot up. Let's take a closer look at the young career of this promising wide receiver.

James Washington: The Young Career Of The Steelers Wide Receiver

What Are Some Of James Washington's Best Abilities?

In addition to his receptions and touchdowns, Washington impressed with his yards after catch ability and first down receptions. Averaging 17 yards per catch and recording 31 first downs on 44 receptions, James Washington emerged as a steady deep threat for the Steelers offence. Washington was limited by the lack of his quarterbacks' playmaking abilities though. Mason Rudolph and Devlin Hodges don't have the arm or the vision to utilize Washington's abilities to the maximum. Expect Rothlisberger to find Washington on deep plays. Big Ben is one of the best deep ball throwers in the NFL and it will be a match made in heaven.

What Can Be Expected From James Washington In This Season?

James Washington is going to come into 2020 with a more polished route tree. If he looks better on these two parts of his game, Washington could emerge as the Steeler's top receiver for the future, especially if Juju Smith-Schuster leaves in free agency. A lot of analysts love Washington's game and feel that he doesn't get the attention that he deserves. With Big Ben's return and Smith-Schuster's probable departure, Washington might be the focal point of the Steelers' passing game in the 2020-21 season.

What Is James Washington's Skillset?

People weren't very keen on drafting Washington very high in the NFL draft. Many critics viewed his unimpressive 40-yard dash, lack of defensive competition in the big-12, and size as indicators that Washington won't succeed in the NFL. However, Washington proved the doubters wrong by showing huge development in his ball-tracking, route running, and footwork.

Washington tracked down balls very well last season. His exploits were even more impressive considering who was throwing the balls towards him. Washington knew exactly when to turn his head and how to contort his body to be in the right position at the right time. Washington caught many balls outside of his catch radius which is an ode to his ball-tracking development. His tracking ability will help reduce the number of picks that Ben Roethlisberger will throw during the season as well.

James Washinton doesn't have Tyreek Hill type speed, but he makes up for his lack of speed with elite footwork. It allows Washington to create more separation so that every catch won't be so heavily contested. In year one, Washington was limited to running vertical routes. However, his polished footwork allowed the coaching staff to expand his route tree in year two. That trend is going to continue in his third season as well.

Where Is James Washington On The Steelers Depth Chart?

The Steelers depth at the wide receiver position is stacked. Not only do you have emerging star JuJu Smith-Schuster leading the group, but the team also has Diontae Johnson, an incoming sophomore who impressed with his elite separation ability. In the 2020 NBA draft, the Steelers drafted promising young receiver Chase Claypool in the second round. Along with Eric Ebron and Vance McDonald at the tight-end position, the Steelers have a bevy of weapons to assist Big Ben. This embarrassment of riches might end up reducing the individual stats of the players as they will cannibalize each others' plays. You can't give everybody the ball, and some guys will simply get lost amongst the pack. While this is true, Washington's growth as a route runner and incredible physicality will give him the edge over Smith-Schuster and Johnson.

Also, he's the main deep threat on this team. JuJu Smith-Schuster makes his money in the slot as he struggles, at times, to get separation on the outside. Diontae Johnson showed tremendous promise in intermediate routes, flashing an ability to create separation at an elite level. Claypool is your outside big-bodied red zone target. More or less, every wide receiver on the Steelers squad has crucial roles to fulfill. Washington is expected to shine under Ben Roethlisberger's veteran arm.

How Is The Pittsburgh Steelers Offense?

As we discussed above, the Steelers wide-receiver group is stacked. They have four wide receivers who are great at specific roles and have a good tight-end lineup as well. Since the departure of Le'Veon Bell from the team, the Steelers haven't really had a strong running game. So the Steelers offence will be far more airborne in the coming season.

The Pittsburgh Steelers also have a very strong offensive line. David DeCastro, Maurkice Pouncey, and Alejandro Villanueva lead the charge with capable players like Stefen Wisniewski and Matt Feiler filling the remaining holes. This unit should give Rothlisberger plenty of time to complete intermediate and deep throws. The Steelers offence could be really explosive. Lastly, Washington fills the tough, physical and blocking wide receiver role of Hines Ward for the Steelers. He has a unique ability to make contested sideline catches on the regular. His leaping ability is underrated and his position as an outside threat only opens doors for other receivers like JuJu Smith-Schuster. Again, some may see the Steelers stacked receiving core as a negative. It might not let Washington collect gaudy numbers, but he will be able to make key one on one plays on the outside.

James Washington played very well in 2019. With replacement-level quarterbacks who often made inaccurate passes, Washington made them look like stars in the making. James Washington made many plays on the offensive end and came up with very difficult catches. He proved that he could play a variety of roles for the Steelers offense: a red zone threat off back shoulder fades, a deep vertical threat, a possession receiver off of slant routes, and a target out the slot. Catching balls out of sideline post routes is where James Washington made the biggest impact. As he improves his route tree, things can only get better.

Moreover, fans will also expect more from Washington with Roethlisberger's return. While his stats won't be mindblowing, the Steelers have a loaded receiving core, but James Washington can end up with 900 receiving yards and four to five touchdowns. The return of a future Hall of Famer at the quarterback position will definitely help accelerate the growth of James Washington even further. James Washington might become a fan favorite by the end of the season.