Fluorescence Guided Surgery - How Does It Work? And It Applications In the 1970s, light emitting diodes were invented, which made it possible to use a lot more wavelengths of light. This made it an essential diagnostic tool.

In clinical practice, there are many different optical medical imaging techniques.

Some of the most common ones are endoscopy, optical coherence tomography, photoacoustic imaging, fluorescence imaging and spectroscopy, Raman spectroscopy, and diffuse optical tomography.

Fluorescence guided surgery is an area of optical medical imaging that has gotten much attention and research interest over the past few decades.

This is because it has a lot of benefits and can be used in many different ways.

Fluorescence guided surgery is an imaging technique that helps the surgeon see structures and types of tissue that may not be as clear in white light.

Due to the many potential advantages of fluorescence-guided surgery over more traditional clinical imaging techniques, like higher contrast and sensitivity, less subjective use, and easy instrument operation, research interest in fluorescence guided surgery continues to grow in critical areas like fluorescent probe development and surgical system development, as well as its potent.

Fluorescence has been used in surgery in many different ways, but the first time was in 1947, when the dye fluorescein was used to find brain tumors during neurosurgery.

Since then, many fluorescence visualization techniques and fluorescent probes have been made and used in various clinical settings, and research into their future uses keeps growing.

Fluorescence-based techniques are still popular because they can be used in surgery, have high contrast, are easy to use, make it easy to get an image, and in some cases, like finding cancer cells, have a high molecular selectivity.

In its most basic form, a fluorescence guided surgery system will have a light source and filters to excite the fluorescence contrast agent, often given before surgery.

The probe's fluorescence signal is then collected by removing unwanted signals like excitation light and autofluorescence.

This is done by letting the light pass through the suitable emission filters, then using collection optics to focus the signal on the detector. The signal is then sent to a computer for viewing.

Every part of an imaging system affects the quality of the final image in different ways and to different degrees, so careful thought is needed depending on what the system will be used for.

Fluorescent Probes And Their Types

Intrinsic fluorophores are molecules that produce fluorescence and whose characteristics, such as fluorescence lifespan, may be monitored to explain how they operate inside the body.

While very flexible in their own right, they are challenging to use in fluorescence guided surgery since many biological processes behind their features are not entirely understood.

Despite this, they remain a popular study subject today, with over 1000 search results for 2021 surfacing on ScienceDirect as of April.

Because of the adenine moiety in their chemical structure, they have highly similar structures and identical fluorescence characteristics, with peak emission at 450 nm.

These two molecules are often employed in tandem for autofluorescence-guided surgical applications.

Collagen and elastin are extracellular matrix proteins, with collagen as a structural protein in connective tissue.

These glow at shorter wavelengths than NAD(P)H and flavin adenine dinucleotide, making them appropriate probes for applications requiring a shallow penetration .depth.

Examples include autofluorescence of bone collagen to improve the excision of necrotic bone portions in patients with jaw osteonecrosis.

Extrinsic probes are molecules engineered to glow under certain circumstances to produce a fluorescence signal when one would not otherwise exist.

Fluorescein sodium is an organic dye having excitation and emission peaks at 490 and 510 nm, respectively.

One problem with fluorescein is that it fluoresces in the visible spectrum, which overlaps with the emission of many endogenous fluorophores.

The near-infrared wavelength range is preferable for surgical applications.

Indocyanine Green, another well-known and widely used FDA-approved dye was explicitly created for this purpose.

There is a continual demand for fluorescence-based clinical imaging systems that can work with both authorized fluorophores and those presently under development.

Imaging systems may employ a probe's fluorescence intensity, lifespan, wavelength, polarization, and other features in surgery.

The research technique of choice is time-correlated single-photon counting (TCSPC), shown in a simplified graphic.

On the other hand, recent advances in single-photon avalanche diode arrays promise to improve the capabilities of fluorescence lifespan measurements considerably.

One of the most extensively investigated uses of fluorescence-based surgical procedures in oncology.

The ability to detect tumor drainage locations reliably versus sentinel lymph nodes (SLNs) before dissection will help in future treatment methods such as chemotherapy and radiation.

While using methylene blue alone should be used with care owing to the possibility of greater false negative rates, studies have shown that methylene blue alone may yield identification rates equivalent to those obtained with the combination of dye and tracer. Indocyanine green is a potential option owing to its lower risk of side effects.

According to this research, a switch to just dyes for sentinel lymph nodes mapping may be achievable shortly.

The combination of indocyanine green and methylene blue has also been studied in areas with the highest nodal detection rates in breast cancer patients.

During cancer surgery, it is critical to remove as much malignant tissue as possible while avoiding excessive injury to adjacent good tissue.

However, it is conducted post-operatively and is frequently time-consuming and labor-intensive.

Before new technologies may be considered for ordinary clinical practice, they must equal the diagnostic accuracy of postoperative histology.

The discovery of novel dyes, as well as the improvement of existing dyes, is also of importance for determining tumor margins.

Angiography is a blood vessel imaging method most typically used to monitor the vessels surrounding the heart, brain, lungs, and kidneys.

It may be used to diagnose numerous eye disorders such as macular degeneration, diabetic retinopathy, and eye cancer, in addition to monitoring blood circulation.

Fluorescence angiography has been the subject of several research studies in recent years, with studies focusing on its potential for the diagnosis of other eye problems, such as its combined use with optical coherence tomography for delineating the anatomy of retinal aneurysms and evaluating inflammation of the middle layer of the eye in pediatric patients receiving immunosuppressive therapies, as well as its combined use with endoscopy for the treatment of abnormities.

Indocyanine green is also becoming a more popular dye for use in angiography studies, with examples including its ability to visualize and assess anastomotic perfusion, feasibility studies for indocyanine green fluorescence angiography in the surgical evaluation of abdominal trauma, and demonstrating improvement over current detection methods for cutaneous angiosarcomas, a rare type of tumor with blood vessel differentiation.

Endoscopy is a technique with several therapeutic uses. However, it is most usually linked with examining the digestive tract.

It is used to examine systems in the body other than the digestive system, such as the respiratory, urinary, or female reproductive tracts, as well as to detect various types of cancer, such as bronchoscopy for lung cancer diagnosis, colonoscopy for colorectal cancer detection, and laparoscopy for liver, pancreatic, and ovarian cancer diagnosis.

While most endoscopic treatments are performed using just white light, fluorescence in conjunction with fiber-based techniques may also be employed.

The possibility of such a combination was initially recognized in the early 1990s when laser-induced fluorescence was utilized to detect gastrointestinal anomalies from in vivo tissue spectra.

While this combination is not presently used in standard clinical practice, it has enhanced sensitivity and accuracy in identifying vascular endothelial growth factors in residual tumor tissue from rectal cancer patients compared to MRI and white-light endoscopy.

It has also been employed in label-free fluorescence lifetime imaging microscopy of precancerous and cancerous oral lesions and acriflavine-based differentiation of malignant and normal tissues of the head and neck. 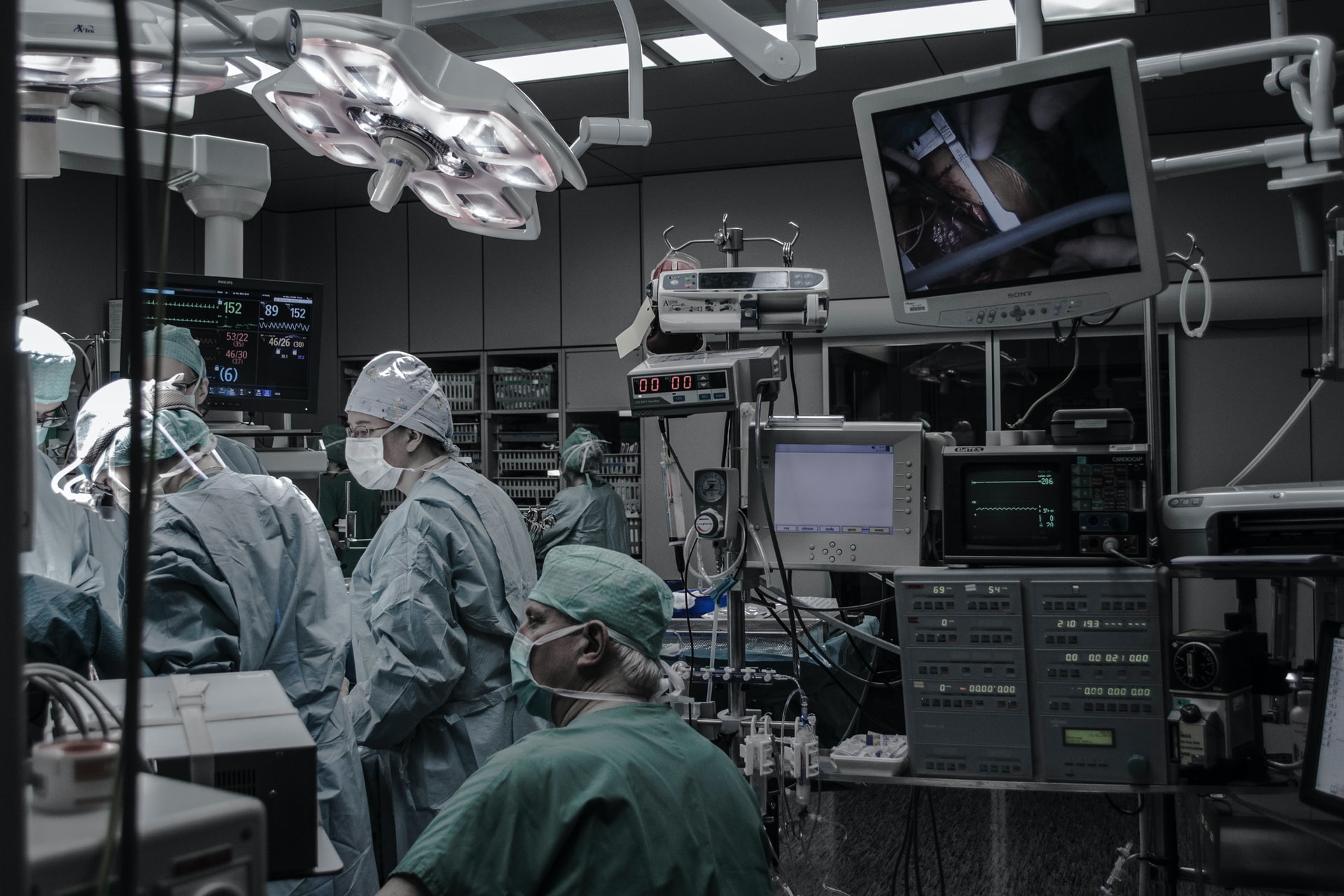 A group of doctors is working in an operation theater

Fluorescence may be used during surgery to view structures such as nerves, ureters, and those in the bile duct, preventing unnecessary injury to these bodily parts.

One example of fluorescence in these domains is using indocyanine green during laparoscopic cholecystectomy to detect the cystic duct and avoid intraoperative nerve damage.

Fluorescence-guided glioblastoma imaging has also been used to detect vascularisation in other anatomical locations of the body, including the parathyroid glands.

Some previously mentioned uses have merged fluorescence with robotic surgery, such as identifying sentinel lymph nodes during laparoscopy and monitoring tumor margins for illnesses like kidney cancer.

Researchers are mainly interested in cancer surgery advancement applications, both for robotics-based surgery and in the larger area of fluorescence guided surgery.

What Dyes Are Used In Surgery?

When Was Image-Guided Surgery Invented?

Since the introduction of the endoscopic method in the mid-1980s, image-guided surgery has been one of the most critical developments in endoscopic sinus surgery.

What Is Image-Guided Sinus Surgery?

You. will get .accurate visual updates during your sinus surgery through image-guided endoscopic sinus surgery.

Using a sophisticated software program, your CT scan pictures are digitally connected to a computerized image-guidance system shown on an operating room monitor in IGS.

How Does Image-Guided Radiation Therapy Work?

IGRT guarantees that the intense radiation is tightly directed at the treatment region by incorporating detailed photographs.

There is still much interest and promise in fluorescence-based approaches for a wide range of surgical applications.

The capacity to employ fluorescence to detect information at the molecular level is an obvious benefit for incorporating it into ordinary clinical practice.

Fluorescence may be best used in the surgical setting as a supplement to current surgical procedures rather than completely replacing them.

Bridging the gap between these two sectors will also be critical to advancing this discipline.