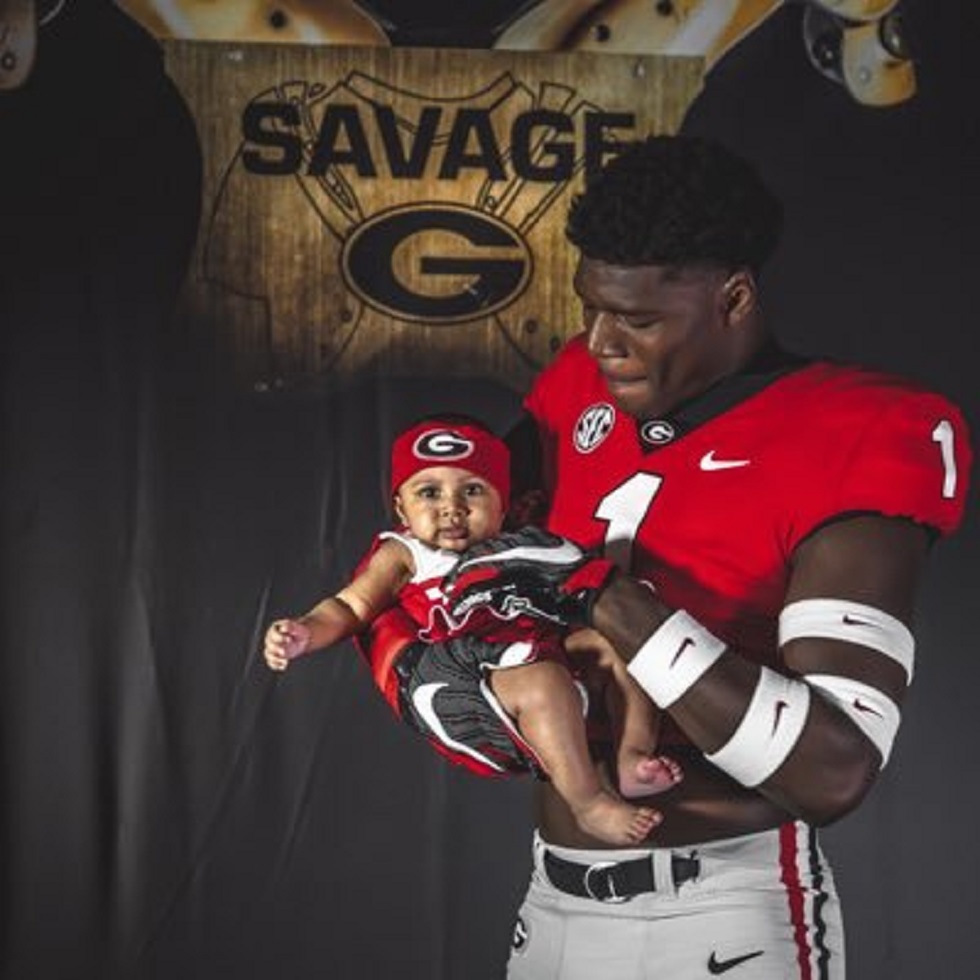 Georgia Football is proving to be one of the nation's top football brands. Their recruiting team has done a great job of getting some of the best talents across the country and they might stand a chance to compete well against powerhouses such as Alabama, Clemson and Notre Dame.

This time Kirby Smart and company have reached into Las Vegas, Nevada to secure the services of one of the nation's top athletes (he played varsity basketball along with football), Darnell Washington out of Desert Pines High School. Let's find out more about him.

Who Is Darnell Washington?

Which Position Does Darnell Washington Play?

Darnell Washington is known for his versatility, but tight end is the position he prefers playing and by all means, the Georgia Football coaches will oblige and start him there.

How Did Darnell Washington Announce His Intent To Join Georgia Football?

It's been reported that Darnell Washington sent in his letter of intent several weeks before the Under Armour All-American game and officially announced it during the game.

Darnell Washington has been clocked with a verified time of 4.75 in the 40-yard dash, but he appears much faster than that on film. Many scouts admitted having never seen a player like him. A man more massive than most players at his position, he looks quite fluid running routes.

He is able to run deep routes like the post, post corner, back-shoulder fade routes, and obviously go routes. He has a limited ability to create space from defenders due to his length, but in all honesty, he doesn't need much space because of the sheer size of the target that he is.

Washington not only runs the deeper routes and typical shorter routes like slants, drags, flats, and crossing routes, his team often threw him the ball in space. The Desert High School coaching staff used screens and bubble screens to get Darnell the ball and allow him to work after the catch.

He has a fantastic ability to run right through would-be tacklers, with strength and power. He also uses a ferocious stiff arm to remove defensive obstacles from his path.

Washington is shockingly agile for a massive man. If an opponent braces for a power attack, Washington has the agility to change directions and leave the defender grasping at air.

Adversaries often try to bring him down by tacking him low, but Washington often counters that with great timing and leaps over the potential tackler. He has been known to hurdle over multiple defenders on the same play.

Not only is the big tight end a good pass catcher, but he is a devastating blocker. He possesses the power to deliver a stunning blow at the snap. Washington also has the strength to route an undersized opponent, anywhere on the field he wants them to go, in the run game.

Run blocking is the primary and most important assignment that Kirby Smart gives to his tight ends. If a player is not a willing blocker, he won't play often in Athens.

How Does Darnell Washington Help The Georgia Bulldogs?

For years Georgia Bulldogs fans have lamented the fact, that the tight end position has not been a focal point of the offense. Many people see a good pass-catching tight end, as the key to unlocking the middle of the field for the Dawgs' passing game.

With the lack of returning depth and star power at the position, the opportunity is there for Washington to earn major snaps much sooner than later. Judging the overall package of attributes that Darnell Washington has in the toolbelt, the Georgia Bulldogs may have just secured their prototype tight end. He might not be able to perform like Rob Gronkowski but he is bound to be a star.

How Have Georgia's Recruiting Efforts Been?

Kirby Smart and his staff dominated recruiting and pushed towards stealing away the nation's top overall class.

Though Zach Evans delayed his announcement, it was believed that he would choose Georgia at the Army All-American games, and with the Evans stuff still looming that brought UGA's 5-star count to four behind only perennial powerhouse Clemson.

What Did Theo Johnson Say About Darnell Washington's Decision To Play At Georgia?

Theo Johnson was very clear about Darnell Washington's decision. It came during the Under Armour 2020 All-American Game. Georgia had its eyes set on both of the elite Tight Ends but Johnson decided to attend Penn State and signed with its program.

Johnson didn't have a pick for his decision. But he did have an opinion about what Darnell Washington's signing with the Bulldogs meant for Georgia.

Johnson said that getting Washington was going to be "huge for Georgia". He went on to add: "Just because he brings so much to the table. It would bring a lot of momentum for the team and for recruiting. Because once you get a guy like Darnell, it is a lot easier because it's hard to recruit tight ends right now.

They don't have guys like Darnell. So if they were to get Darnell would be huge for them this season and seasons to come because they can say, 'look at our guy Darnell.' The kids can then say, 'Look at Darnell, I want to be like that guy. Bang, I'm going to Georgia.' It would be a lot easier for a kid to trust in that decision seeing like a very dominant tight end like Darnell.

I think it would be huge for them. I would be very happy to see Darnell go to Georgia, just so I know that he (Todd Hartley) didn't get me, he is going to be just fine with Darnell. And I know if Darnell goes there he'll be in good hands and he will obviously enjoy it there.

That statement says something about Johnson, too. Johnson's second choice alongside Michigan was the Georgia Bulldogs. He went with his first choice of the Penn State Nittany Lions eventually.

During the process, he had backed up on his decision for some time. During that period, he was shockingly looking at Iowa as his first option. This was a great example of how recruiting decisions can take the strangest of turns at times.

As per Johnson, it was extremely tough to say no to Georgia coach Todd Hartley and Michigan coach Sherrone Moore. However, Johnson did make the calls himself. He also felt terrible walking out for his big reveal. He said:

It was just a terrible feeling calling those coaches. Coach Hartley and I went back to when he was in Miami. It was tough saying no to him because we had a really good bond outside of football and stuff and I just felt like I really connected with him, but it is just part of the process. It just sucks having to go the way it did having to say no to him and stuff.