Biennial Match of the Ryder Cup at the 36th Edition 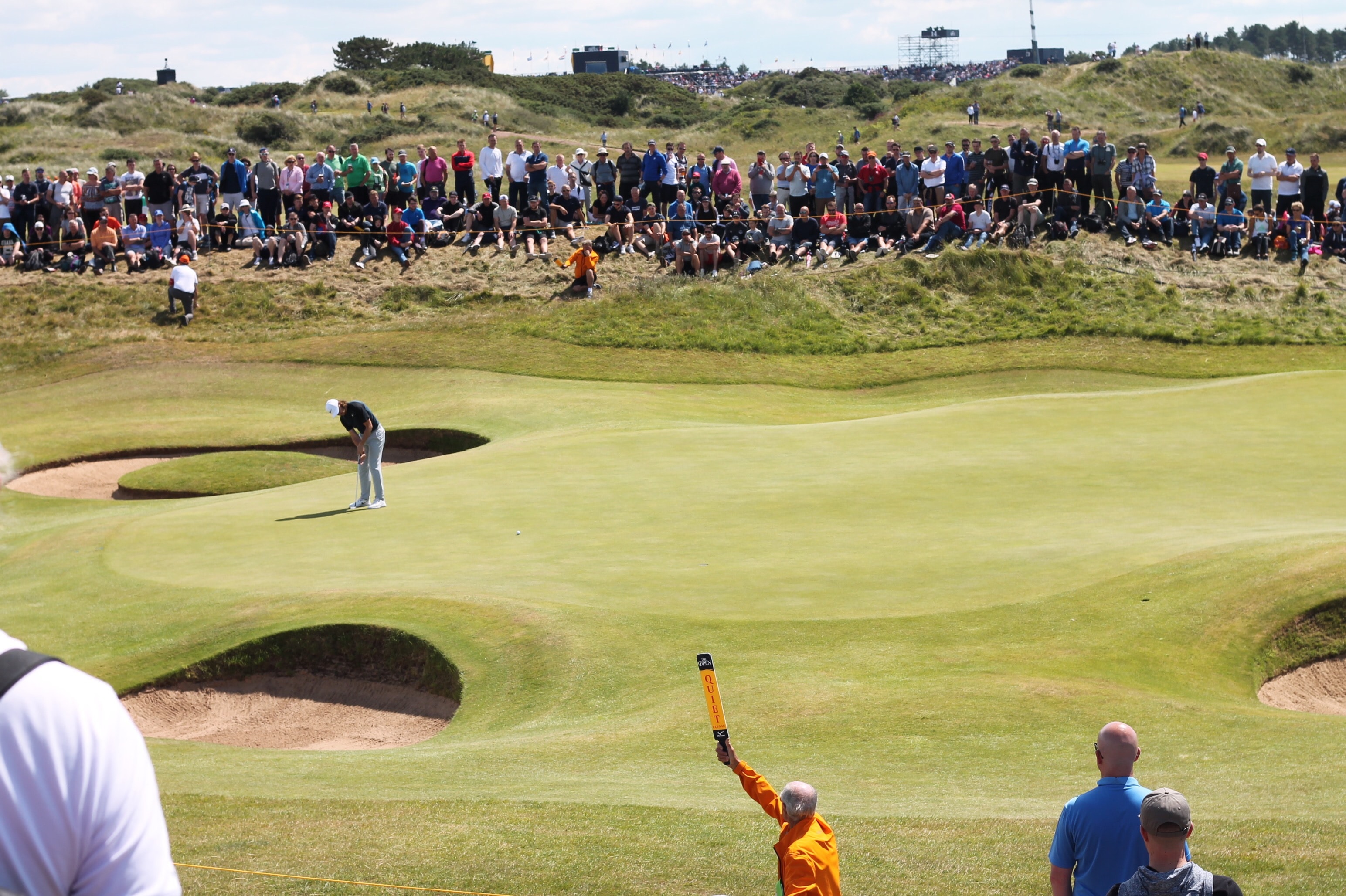 On a table behind the 18th green at The K Club, The Ryder Cup was proudly displayed. It was September 1995, the final day of the Smurfit European Open, and Tom Lehman had just completed a creditable performance as the lone representative of the defeated United States Team from Oak Hill a week previously.

After signing his card, Lehman crept mischievously over to the table, picked up the trophy and pretended to sneak away with it under his arm. Little could he have imagined that, 11 years later, he would be pursuing that treasured prize in earnest, as Captain of the United States Team for The 2006 Ryder Cup at the Co. Kildare venue.

Back in April 1990, Arnold Palmer, whose design company had the target of completing The K Club's courses in time for an official opening 15 months later, also had The Ryder Cup on his mind. He was at Augusta National, reflecting on how the casting vote of the PGA Chairman, Lord Derby, had made The Belfry a compromise choice for the 1993 contest. "I realize that some people felt we were being over-ambitious in putting The K Club forward for 1993, but it was an entirely realistic application," he said.

This is what Palmer added at that time: "In fact, I made it clear to The Ryder Cup organizers that we could have the course in play that fall, if we so wished. I believe it is a perfect setting for a Championship venue, offering a top-quality test in delightful surroundings. I would like to think that if The Ryder Cup passes it by, it would be considered for other prominent events such as the Irish Open."

The Ryder Cup, of course, will not pass The K Club by. On September 22-24, 2006, The 36th edition of the biennial match between Europe and the United States will unfold on the Palmer Course at The K Club in Straffan some 18 miles from the city centre of Dublin.

We are informed that the history of the estate at Straffan, Co. Kildare, dates back nearly 1,500 years to 550AD, about a century after St Patrick had spread christianity to the Emerald Isle. Apparently, a house or church then stood where the village is currently located.

Nothing further of note seems to have happened until the Norman invasion in the latter half of the 12th century, when Richard FitzGilbert de Clare, better known as Strongbow, gave the lands at Straffan to compatriot Maurice FitzGerald, ancestor of the Dukes of Leinster. This grant was subsequently confirmed by King John of England, who signed the Magna Carta in 1215.

The land changed hands several times during the ensuing centuries until being bought in 1831 by Hugh Barton, who had founded a successful wine firm in Bordeaux. In fact, he was reared there and was fortunate to escape the worst excesses of the French Revolution, including a planned encounter with the guillotine as a member of the wealthy, merchant classes.

As things turned out, a year after moving to Straffan, he commenced the construction of a brand new house for his family. It was this house that would ultimately form the basic structure of what is the east wing of the present-day hotel. The design was based on a great chateau in Louvesciennes, to the west of Paris. Indeed the outlines of the mansard roof, chimneys and windows can still be seen in the Kildare Hotel.

For Barton and his wife Anne, who was the daughter of a naturalized French subject of Scottish origin, Straffan became a haven of peace and serenity after the turmoil in France. Later on, as a finishing touch to the house, he added the Italian-style campanile tower, which is still there today and is similar to the tower built on Queen Victoria's estate at Osborne in the Isle of Wight.

Other refinements added by subsequent generations of Bartons were two suspension bridges to the island in the Liffey which is now home to the 16th green on the Palmer Course. At the beginning of the 20th century, the four-storey house had 30 bedrooms and in 1963, the garden was given a parterre, linking the house with the river.

More recent owners included Stephen O'Flaherty, a legendary figure in the Irish motor industry and the first concessionaire for Volkswagen cars for these islands. He sold Straffan in the 1960s to Irish-American Kevin McClory, who will always be associated with James Bond as a producer of "Thunderball" in 1965 and executive producer of "Never Say Never Again" in 1983.

Locals still recall the charity party he played host to in 1968, which went on for days and had Sean Connery, Shirley McLaine and Peter Sellers among the guests.

Incidentally, when Connery returned to Straffan eight years later as an 11-handicap competitor in the Chris de Burgh Golf Classic, he made the admirable contribution of five net birdies to the fourth-placed team, which was led by none other than Christy O'Connor Snr, a long-time friend.

Dr. Smurfit takes up the story: "When I was in my thirties (1970s) and I saw the way golf was being played in America and in parts of Europe, I got the idea of building a country club here, something of a truly international standard. In hindsight, it was probably fortunate that it didn't happen for some years, because such a venture would have been ahead of its time and probably wouldn't have taken off back then."

At first, David Adamson, who had been Dr. Smurfit's personal assistant since 1972, became the sole resident of the house. He recalled: "I was told it was haunted, which would explain why people looked at me a little strangely while enquiring if I had had any interesting experiences there. I regret to say that in the course of six months, I didn't. It was a lovely old estate, still with some horses, though not many."

Then, as part of Dr. Smurfit's contract with the Jefferson Smurfit Group, whereby they had the first option on any venture he embarked upon, the estate became part of the multi-national packaging company.

With a view to developing it as a golf resort, the next step was to employ a designer and the original candidates were Seve Ballesteros, Peter Alliss and Clive Clark; Dave Thomas and John O'Leary and the American, Pete Dye. As the designer of Harbour Town and the fiendishly difficult Stadium Course at Sawgrass, Dye had many admirers internationally, but he declined the invitation to get involved at Straffan because he did not work outside of the United States.

Still anxious to have an American onboard nevertheless, Dr. Smurfit came up with the idea of approaching Palmer, who, with his partner Ed Seay, had become active in the design business by that time. In the end, it came down to a choice between him and Thomas and though more expensive, Palmer was deemed to have the edge in the context of global marketing.

Little more than a year after the official opening in July 1991, The K Club played host to the biennial PGA Cup in which the Americans retained the trophy with a 15-11 win. The Irish Professional Championship was also staged there in 1992 when Eamonn Darcy captured the title.

By then, Straffan House had been transformed into Ireland's only five red-star hotels. Despite Palmer's earlier view on the golf course, the hotel would have been too small had the 1993 Ryder Cup bid been successful, so the first new wing was built, bringing the accommodation up to 36 rooms. The next expansion, which was planned in 1999 after the venue was officially awarded The Ryder Cup, was completed in 2001. It involved the addition of a further 33 rooms.

Meanwhile, in May 1998, The K Club had embarked on a further q12.5 million development, extending its facilities to 36 holes through the construction of the Smurfit Course, again by the Palmer company. It played host to the Smurfit European Open in 2004 when Retief Goosen triumphed and the tournament is scheduled to be played on that course in 2006 with the Palmer Course being prepared for The Ryder Cup.

The final piece of the resort jigsaw was completed in November 2004 with the official opening of a luxurious Spa, at a cost of q10 million. With this, The K Club now comprised a 78 bedroom hotel, two championship standard golf courses, significant housing costing up to q2.5 million per unit and two clubhouses, the newer of which measured a formidable 50,000 square feet.

All of which was bought back by the partnership of Dr. Smurfit and wealthy club member, Gerry Gannon, in June 2005 in a deal valued at q115 million. "Though the entire development was a bit of a gamble, getting The Ryder Cup has confirmed that we made the right decision," said Dr. Smurfit.

On a return visit for the Smurfit European Open in the summer of 2005, Lehman pointed to the new West Wing of the hotel. "That's where the American Team will be based," he said. "Europe with being at the other end." Somehow one sensed he was well pleased with the prospect of calling it home for a week in September, 2006.