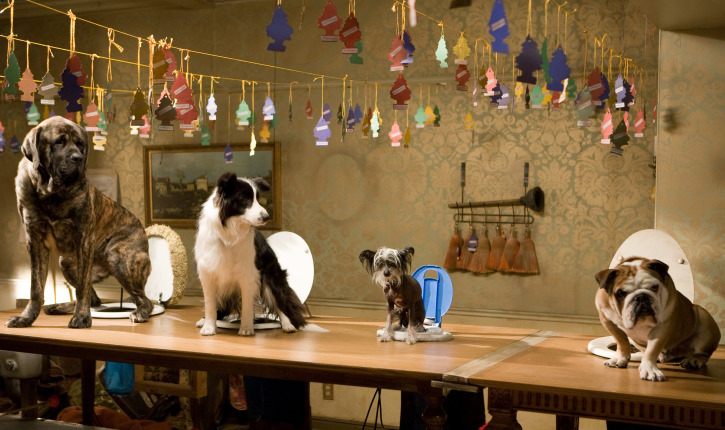 There's something about dog movies that make us feel more emotional than movies about humans, at least for dog lovers. The way man's best companions are brought to life on film, whether animated or live-action, can truly pull at your emotions. Disney does it best (and has for many years), and our list reflects that, but there are a few non-Disney films that are also must-sees for dog lovers.

For those of you who like adventure and dogs, this 1994 film is a must-see. The plot revolves on a guy who joins a dog-sled race in order to save his family's property.

Freezing weather, fatigue, and other adversities put the young guy and his squad of dogs, headed by Gus, a stunning Siberian Husky with one blue and one green eye, to the test. As the team battles to win their race from Winnipeg to St. Paul, Iron Will demonstrates the true inner power that both humans and dogs possess.

One of Disney's most popular films was this 1961 masterpiece. Pongo and Perdita are content with their 15 pups and lovely owners, Roger and Anita until Cruela De Vil decides to convert the canines into a trendy fur coat.

Even if you've watched the movie before, this familiar tale will keep you guessing and make you laugh out loud. For your dog, check out this 101 Dalmatians pet tag!

This animated fantasy/drama is very dramatic for a children's film, yet it is a timeless story. Carface assassinates Charlie B. Barkin, a canine casino owner (a canine gambler).

He is fortunate enough to be allowed to return to Earth from heaven, where he vows to pursue vengeance. Things get more difficult when Charlie falls in love with Anne-Marie, a young orphan girl. This 1989 film is both hilarious, sad, and optimistic.

The storyline combines drama, humor, and even historical events, resulting in an intriguing plot and a touching tale of a boy's relationship with his dog.

The tale of Benji is about a charming little mutt that roams throughout a tiny Texas town. He lives a fairly ordinary existence, receiving handouts from a local store owner and harassing one of the town's regular cats until two of his favorite youngsters are abducted.

Benji embarks on a quest to rescue the children, and along the way, he discovers love. It's a sweet tale told through the eyes of one adoring dog. In 1974, Benji was filmed.

Bartleby Livingstone (Trey Loney), a tween who loves comic books, has a special superhero-themed 12th birthday party thrown by his grandfather (John Ratzenberger). Captain Canine (Colin Hanks), a super-dog who is really an extraterrestrial disguised as a dog, is Bartleby's favorite comic series (authored by a local author-illustrator).

On his 12th birthday, Bartleby and his friends (each with their own Golden Retriever puppy) discover that the comics are all true and that they must aid in the defense of the peaceful alien nation against the evil Commander Drex, who has landed in Bartleby's town in search of the "rings of Inspiron." The children, on the other hand, discover the rings first and place them on their dogs, transforming them into SUPER BUDDIES.

This film, which was released in the late 2000s, is relatable to most pet owners. The film makes you laugh at Marley's rebellious puppy antics, but it also makes you realize how, despite their mischief, dogs can bring a family together.

This one will make you adore your dog even more than you ever imagined possible.

With one of Hollywood's most famous dating sequences, Lady and the Tramp stole the show in 1955. (How many people have attempted the spaghetti technique since then?) The forbidden love between a well-bred, gorgeous cocker spaniel and her street dog lover is the subject of this famous tale.

It's a great option for date night because of its romantic tone.

This timeless classic was first published in 1957, so it's been pulling your heartstrings for more than half a century.

Old Yeller tells the tale of how we grow to love our dogs, the responsibilities they bestow on us, and how we cope when they die. If you haven't watched it yet, bring tissues since it is a tearjerker.

I tend to avoid sad dog movies, but I make an exception for The Art of Racing in the Rain since the protagonist dog is so human in so many aspects. The film (based on Garth Stein's novel of the same name) is narrated by Enzo, a Golden Retriever who is knowledgeable beyond his years (voiced by Kevin Costner).

It follows Enzo and his closest buddy, Denny (Milo Ventimiglia), a race-car driver, through the key events and changes in Denny's life through the years. Before you watch, know that Enzo does eventually go to doggy heaven (and there are a lot of tears along the way), but The Art of Racing in the Rain lets Enzo tell his own narrative and offers him a happy conclusion, so it's worth the weeping headache you'll have afterward.

The Fox and the Hound, a real friendship story, was published in 1981. The tale is mostly lighthearted, but it does address some serious themes along the way, such as how society fosters prejudice.

It's a Disney classic that will tug at your heartstrings in all the wrong places.

This stop-motion dog short, which is in the same spirit as Wes Anderson's blockbuster 2009 comedy Fantastic Mr. Fox, features Wes Anderson's unique brand of cinematic brilliance. In the Isle of Dogs, a fictitious Japanese city is governed by a cat-loving dictator mayor who has ordered that all dogs must be exiled to a garbage island and forced to fend for themselves following an epidemic of canine influenza.

Bryan Cranston, Edward Norton, Jeff Goldblum, Live Schreiber, Bill Murray, Scarlett Johansson, and the list goes on and on are among the voice actors in this picture. The Isle of Dogs is both hilarious and poignant, and it's a must-see for dog lovers as well as fans of Wes Anderson's previous films.

This 1986 film was first released in Japan, and the narration was subsequently recorded in English by Dudley Moore. The film depicts a pug and a cat who form an unusual relationship before being cruelly separated.

As you follow the two as they try to locate each other again, a live-action element adds intrigue to the narrative and cinematic style.

Who doesn't have fond recollections of Homeward Bound from their childhood? This 1993 film tells the tale of three dogs who, believing that their owners have abandoned them when they travel out of town, forsake their cozy domestication and go out into the wild to find their people. Sassy, a Himalayan cat, Shadow, a Golden Retriever, and Michael J. Fox, who voices Chance, an American Bulldog, are the film's primary pet characters. The odd trio will take you on a hilarious and suspenseful adventure. This film is ideal for both cat and dog lovers.

Even though the dogs in Best in Show aren't the primary characters, it's still a dog movie. A great ensemble of comedy luminaries stars in this hilarious mockumentary, featuring a pre-Creek Schitt's Catherine O'Hara and Eugene Levy as a terrier-obsessed married couple. The video follows a group of dog owners as they compete for first place in the Mayflower dog show.

Best in Show not only depicts the wild, eccentric world of competitive dog shows (with some of the most gorgeous dogs as supporting characters), but it also delves into some of the more neurotic and bizarre behaviors that dog owners engage in. The film's centerpiece, though, is Fred Willard's performance as the dog show announcer.

Best in Show is a must-see canine movie for this comedic treasure alone. On Amazon, iTunes, YouTube, Vudu, and Google Play, you can rent or purchase Best in Show.

Turner and Hooch become one of our all-time favorite police teams in 1989.

The tale of Tom Hanks' clean freak and his companion Hooch, who may or may not have a drooling issue, will make you chuckle and warm your heart. It's without a doubt one of our all-time favorite dog films!