Mountains have two fundamental impacts on the atmosphere, which may be classified as passive and active effects.

Passive effects occur when a flow is altered by the presence of mountains and entail the interchange of momentum between the surface and the atmosphere.

In hilly and mountainous terrain, the Spatio-temporal structure of the daytime convective boundary layer height is considerably changed and more complicated than in level terrain.

However, detailed observations of the convective boundary layer structure and comprehension of the underlying mechanisms remain restricted.

Aerosols are a subgroup of air pollutants, although their physical transport and mixing mechanisms are the same as those of other air pollutants.

While the aerosol and convective boundary layer heights are almost identical over level ground, mountainous topography significantly impacts aerosol dispersal in the atmosphere.

There is frequently a rise in potential temperature and wind speed near the top of the convective boundary layer, as well as a significant fall in humidity and pollution concentration.

A stable layer is one in which the potential temperature rises with height.

Due to mountain venting activities, aerosols and humidity may be carried over the convective boundary layer top. 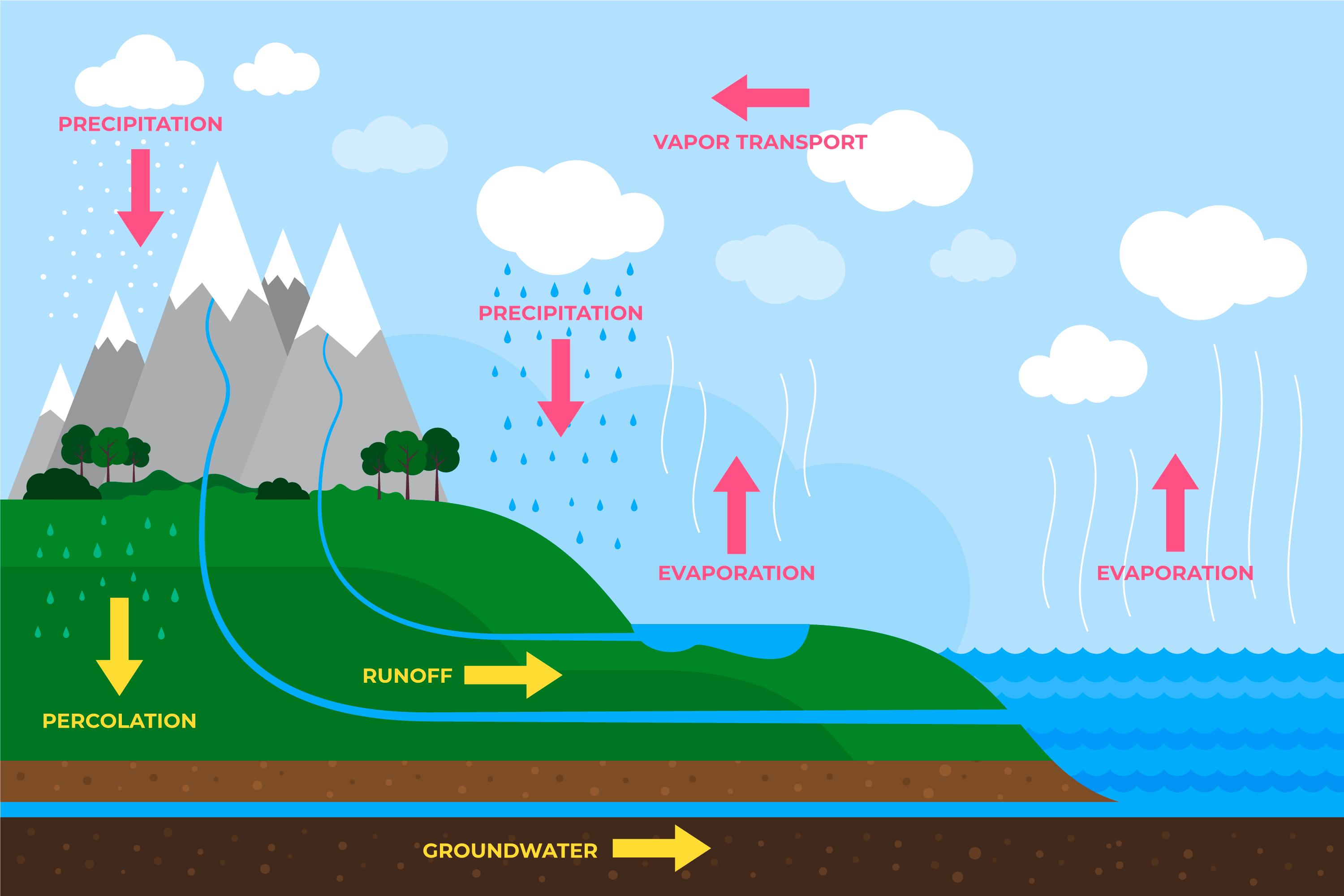 Illustration of the water cycle

Flows interacting with convective boundary layer heights across hilly and mountainous terrain are often thermally driven and occur at various geographical and temporal dimensions. However, the accompanying flow structure is crucial for the inquiry.

Many of the observational studies analyzed did not use vertical soundings of turbulence parameters.

The emergence of thermally driven upslope winds is the most noticeable aspect of the convective boundary layer over slopes during good daytime weather.

The near-surface airflow over slopes is often down-valley just before daybreak. Only shallow and mild inversions are often seen over higher slopes and mountain peaks after daybreak.

An upslope wind layer forms over insolated slopes after daybreak, with a return circulation toward the valley center above.

After the nightly valley inversion layer is eroded, up-valley winds or other regional wind systems take over.

The depth of the convective boundary layer over a slope often correlates with the depth of the slope wind layer. After sunset, surface cooling causes downslope winds to build in the forming surface inversion layer, while up-valley and regional winds continue to prevail aloft.

Any disruption in upslope wind circulation might cause turbulent degradation of the inversion above the slope wind layer.

The relative significance of surface heating, subsidence, and other processes in valley atmospheres may cause significant differences in convective boundary layer development from valley to valley.

Three fundamental types of convective boundary layer formation have been recognized in valleys. The removal of air mass from the valley by upslope flows determines the subsidence rate over the valley center.

A well-mixed potential temperature profile throughout the whole valley atmosphere is not always achieved, particularly when moderate surface heating. On the other hand, cold air advection and subsidence heating tend to inhibit convective boundary layer expansion.

A somewhat deep valley convective boundary layer may form during the morning transition period between the erosion of down-valley winds in the residual high valley inversion and the start of up-valley winds.

Up to the snow line, the quantity of sensible heat available for heating the slope border layer normally rises with elevation.

The vertical temperature structure may stay relatively constant in deep valleys with abundant vegetation and moisture.

Convective boundary layer structure throughout the valley is influenced by regions of horizontal flow divergence or convergence and the accompanying compensatory vertical movements.

Basins and plateaus are ubiquitous geographical features around the planet, affecting atmospheric dynamics on scales ranging from the local to hundreds of kilometers.

Convective boundary layer development resembles that of basins, valleys, and plateaus. The comparison with plateaus is especially true for basins with raised basin floors.

Winds from the plains to the basin have been postulated to diminish or level off convective boundary layer growth in the afternoon.

After the commencement of plain-to-basin wind in the late afternoon, a rapid decrease in convective boundary layer height on the basin-side slope might occur.

Plateau-to-plateau circulation is critical for establishing moist convection and significantly impacts the commencement of the Tibetan Plateau monsoon.

While numerous efforts have been made to define the convective boundary layer height spanning valleys, slopes, basins, and plateaus, many observations demonstrate the integrative influence of the many mechanisms at work.

The Bernoulli effect may explain a drop in convective boundary layer height, which causes the winds over the mountain top to accelerate up.

Various spatial convective boundary layer top behaviors have been found, which may be classified into four main patterns.

Atmospheric stability, synoptic wind speed, and vertical and horizontal orographic scales are discovered to be relevant.

Advection, entrainment, and friction cause the convective boundary layer to follow the topography, although gravitational forces tend to level it.

The effect of advection in making the convective boundary layer height more or less terrain following is unclear, although its potential significance is acknowledged.

Aerosols are a subgroup of air pollutants, although their physical transport and mixing mechanisms are the same as those of other air pollutants. Addressing the issue is critical for determining convective boundary layer height using lidar readings.

While the aerosol and convective boundary layer heights are almost identical over level ground, mountainous topography significantly impacts aerosol dispersal in the atmosphere.

When slope flows converge over a mountain crest, or there is extra sea breeze flow in coastal terrain, this impact may be very intense.

What Is The Meaning Of Convection Current In Science?

A convection current is a fluid stream pushed by thermal convection.

What Part Of The Atmosphere Does Convection Occur?

This occurs when the air is colder near the ground than it is higher above the surface.

What Is A Boundary Layer And How It Is Formed?

A boundary layer is generated when fluid and a solid move relative to one another. A boundary layer is an imaginary layer of fluid that forms when a solid and fluid are in relative motion at a layer where the fluid velocity equals 99 percent of free stream velocity.

Why Is Boundary Layer Important For The Analysis Of Convection Transfer?

If an insulating layer of enough thickness and low temperature is present on exterior surfaces, heat transmission is mainly driven by convection, and the effects of radiation may be neglected.

As a result, calculating heat transport in the convective boundary layer is critical.

What Is Convective Boundary Layer Height?

This layer spans from the earth's surface to a capping inversion, usually occurring at the height of 1-2 km over land by midafternoon.

Observations made in situ and remote sensing are critical for expanding our understanding of boundary layers in hilly terrain.

Lidar-derived aerosol layer heights must constantly be evaluated as a surrogate for convective boundary layer heights.

Some first ways of quantifying convective boundary layer height across hilly terrain have been established, but they need to be tested and extended.

The combined influence of land cover and orography on heights is similarly poorly understood. In hilly terrain, convective boundary layer behavior is directly related to vertical transport and mixing processes.

Thermally-induced flows through steep terrain may contribute to the passage of pollutants over the convective boundary layer top.

The layer impacted by mountain-induced circulations and venting processes is also referred to as the mountain convective boundary layer.