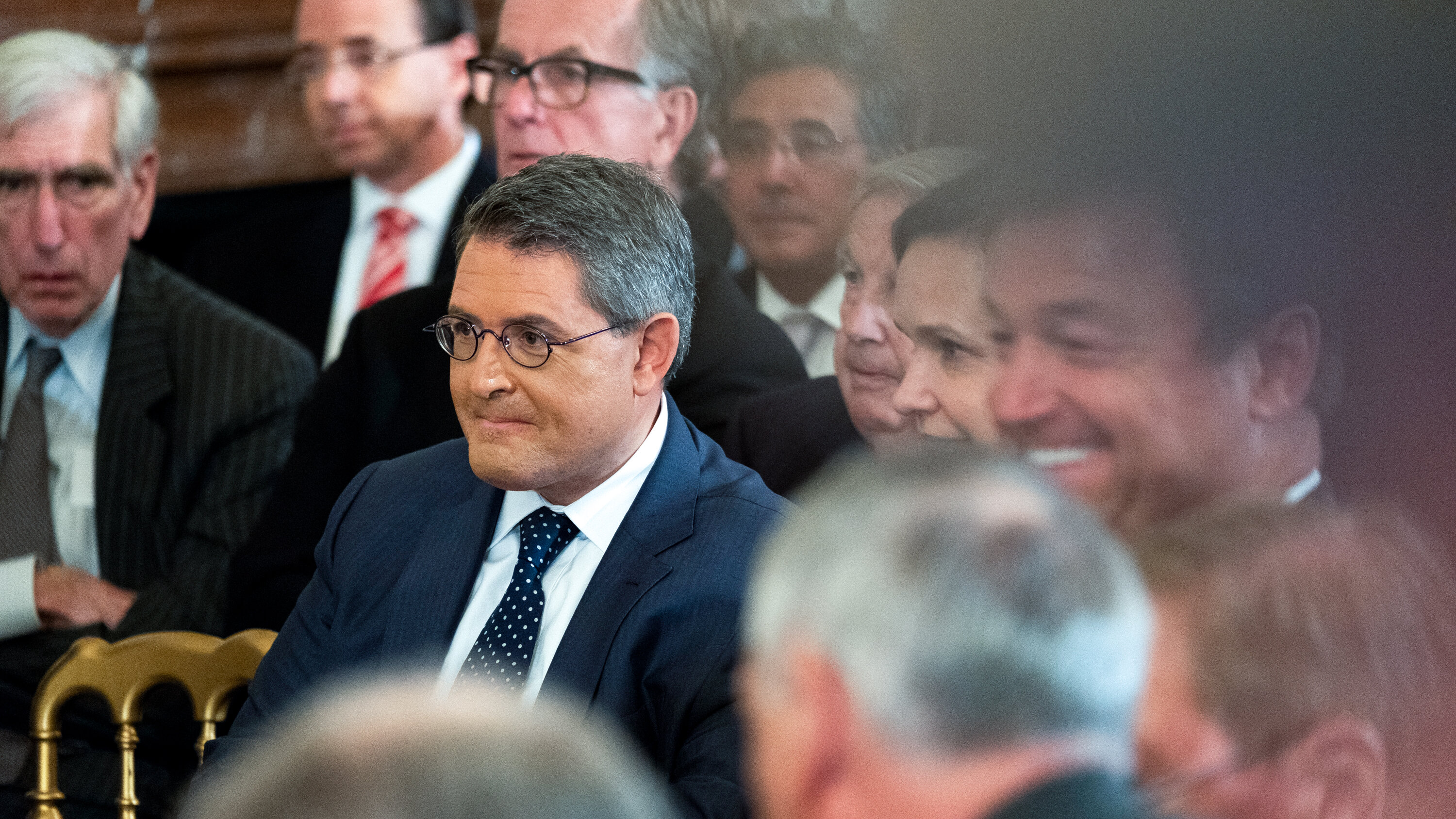 The new conservative group got 1.6 billion dark money donation from a single donor.

The largest single donation to a politically focused nonprofit that has ever been made public, $1.6 billion was given to a new organization managed by a well-known conservative lawyer.

This windfall might be utilized to advance right-wing causes.

According to a tax form CNN obtained from the IRS, the nonprofit Marble Freedom Trust received the donation in the form of shares and subsequently distributed more than $200 million to other right-wing organizations last year.

Leonard Leo, the co-chairman of the hardline Federalist Society and former adviser to President Donald Trump on Supreme Court nominations, is the head of Marble Freedom.

He also oversees a vast network of other right-wing nonprofits, or "dark money groups," that do not reveal their contributors.

The payment was linked to Barre Seid, a low-profile 90-year-old Chicago electronics firm executive and philanthropist who has already been associated with smaller anonymous contributions to other right-wing organizations, according to a CNN analysis of bank records.

Seid was also named as the donor by The New York Times, which published the initial article on the gift on Monday.

Astonishingly, the sizable donation elevates the Utah-based organization, which doesn't even have a website, to the list of the best-funded groups in the US supporting conservative causes.

Comparatively, the one donation raises more than twice as much money as Trump's campaign committee did over the whole 2020 election cycle.

The Washington-based Citizens for Responsibility and Ethics' research director, Robert Maguire, referred to the donation as "stupefying" and the "by far" largest known contribution to a dark money political organization.

I've never seen a group of this magnitude before. This is the kind of money that can help these political operatives and their allies start to move the needle on issues like reshaping the federal judiciary, making it more difficult to vote, a state-by-state campaign to remake election laws and lay the groundwork for undermining future elections.

In a statement, Leo referred to two liberal billionaires and a consulting firm that oversees a number of smaller dark money organizations on the left, saying that "it's high time for the conservative movement to be among the ranks of George Soros, Hansjörg Wyss, Arabella Advisors and other left-wing philanthropists, going toe-to-toe in the fight to defend our Constitution and its ideals"

Requests for comment left at the phone numbers listed for Seid and his longtime aide were not returned.

The Anonymous $1.6 Billion Donation Has Ties To Chicago Executive

After the Supreme Court's Citizens United ruling in 2010, the practice of organizations participating in politics but concealing their sources became known as "dark money."

Many dark money organizations, including Marble Freedom, are 501(c)4 charities, which are permitted to engage in political activities so long as it is not their major activity.

In order to influence voters or advance agendas without disclosing their extremely wealthy benefactors, groups on both sides of the political aisle have increasingly turned to dark money in recent years.

However, the Marble Freedom donation vastly outpaces even the biggest of the previously known groups.

The tax return for Marble Freedom is for the period from May 2020 to April 2021.

According to the tax form, the gift of somewhat more than $1.6 billion consisted of the entire stock of a privately held firm, which Marble Freedom later transferred to another corporation.

According to Marcus Owens, an attorney and former director of the IRS section on tax-exempt organizations, who reviewed the form for CNN, the agreement probably saved Seid a significant sum of money in taxes.

Seid would probably have had to pay capital gains tax on the sale proceeds if he had directly sold the company's stock.

He could have avoided paying that tax by giving the shares to Marble Freedom, and the organization would be exempt from doing so.

According to a letter from Marble Freedom, exposing which corporation donated to it and to whom it sold would,

Disclosing it would effectively disclose the identity of its donors.

However, information about the donation links it to the sale of Tripp Lite, a Chicago-based manufacturer of electrical devices whose longtime chairman was Seid.

According to the tax form, Marble Freedom sold the business on March 17, 2021, following the receipt of the donated shares.

The American-Irish power corporation Eaton purchased Tripp Lite for $1.65 billion on the same day, according to paperwork filed with the Securities and Exchange Commission.

According to Law360 at the time, Sullivan & Cromwell in New York represented "the sole stakeholder of Tripp Lite" throughout the sale.

According to the tax form, Marble Freedom paid $940,000 in legal expenses to Sullivan & Cromwell less than two weeks later.

Numerous lawyers engaged in the transaction did not reply to requests for comment, and an Eaton representative stated that the business would not give more information regarding the acquisition.

In federal campaign donation documents from 2008, Seid identified himself as the "owner" of Tripp Lite while serving as chairman and CEO.

According to a Tripp Lite Facebook post, he spent more than 50 years at the business that makes power strips, surge protectors, and other gadgets.

According to Census statistics, he was born in Russia and raised in Chicago before earning his degree from the University of Chicago.

Seid has a history of making anonymous contributions to conservative political organizations and causes.

Right-wing nonprofit the Bradley Foundation claimed in an internal 2015 memo that "Barre Seid (anonymously)" had given money to the conservative think group Foundation for Government Accountability.

The paper, which was later used as an exhibit in Senate evidence, was one of a large collection of Bradley records that had been stolen and leaked.

Furthermore, according to a 2010 article by Salon, "Barry Seid" was identified in tax records as the name of an unidentified contributor who paid close to $17 million to a company that created an anti-Islam video and distributed DVDs of the film to millions of homes before the 2008 election.

Seid's assistant informed Salon that he did not donate to the cause, but she did not say whether he did so by going via another charity.

And according to emails that have been made publicly available, Seid may possibly be the unnamed donor who gave George Mason University's law school $20 million over five years in order to rename it for retired Supreme Court Justice Antonin Scalia in 2016.

Allison Pienta, a graduate of George Mason Law, received the emails through a public records request and published them in 2019.

Leo coordinated the gift, according to the school, which has declined to reveal the identity of the donor.

Through a different nonprofit organization, the Barbara and Barre Seid Foundation, Seid and his wife make public donations.

This foundation primarily supports universities and cultural institutions in Chicago, but it has also given to conservative and libertarian organizations like the Cato Institute, the Competitive Enterprise Institute, and the Heartland Institute.

In the 1990s and 2000s, Seid also contributed to a number of political campaigns in Illinois and overseas.

Marble Freedom Trust has already distributed hundreds of millions of dollars to other shadowy organizations in its early years.

Leo, chairman and trustee of Marble Freedom, is one of the most well-known names in the world of conservative dark money.

Leo has managed or served on the boards of more than a dozen distinct charitable organizations.

He is a veteran leader at the Federalist Society, a nationwide network of right-leaning lawyers.

A number of his organizations have participated in political campaigns endorsing conservative Supreme Court nominees and engaged in intricate expenditure networks.

According to Maguire, the latest $1.6 billion gift "solidifies Leo as just an absolute gravitational force within the conservative political and legal world."

He was already the man behind the scenes raising money for reshaping the American judiciary, and this amount of money just takes it to a stratospheric level.

Leo is reported as receiving a $350,000 annual compensation for working 25 hours per week for the organization on the Marble Freedom tax form.

In accordance with the principles and aspirations outlined in the Declaration of Independence and the Constitution of the United States, the group's mission statement is "maintain and expand human freedom."

Even while politics can't be its main priority, it can still utilize part of its enormous resources to affect this year's midterm elections or future ones.

When it comes to campaign spending, Anna Massoglia, the Editorial and Investigations Manager at OpenSecrets, a group that studies campaign finance, said, "This is such a significant amount that it would be a game-changer if they do decide to devote even a portion of that to election-related spending."

Between the sale of the stock in mid-March 2021 and the end of April 2021, transactions that appear to have occurred, Marble Freedom reported making four donations to other NGOs.

The Rule of Law Trust, a dark money foundation run by Leo that has given money to other conservative groups, received the largest donation of $153 million.

The gift from Marble Freedom thus indicates a significant increase in the organization's funding.

Donors Trust, a nonprofit that gives money to nonpartisan as well as conservative and libertarian groups, received a $41.1 million contribution from Marble Freedom.

As a donor-advised fund, the organization allows its donors to specify where they would like their contributions to be distributed.

Donors Trust has in the past given millions of dollars to organizations that have promoted bogus allegations of election fraud and pushed for stricter voting regulations.

In the past, the organization has stated that its gifts are meant to "serve the public good."

Additionally, Marble Freedom contributed $16.5 million to The Concord Fund, a nonprofit that has supported conservative candidates for the Supreme Court and other judgeships and is linked to an organization that has promoted restrictive voting laws.

The Concord Fund has supported conservative candidates for the Supreme Court and other judgeships.

According to its most recent tax filing, Concord, formerly known as the Judicial Crisis Network, raised $20.4 million between July 2019 and June 2020.

One of them is Tyler Green, a former Utah solicitor general who recently represented the Republican National Committee and other GOP organizations in a number of disputes involving voting.

Green is a former law clerk for Supreme Court Justice Clarence Thomas and is designated as Marble Freedom's administrative trustee.

The residence that Green owns in North Salt Lake, Utah, is listed as the trust's address.

Jonathan Bunch, a former vice president of the Federalist Society who has participated in a number of Leo-led organizations, is the third member of the board.

The successor trustee for Marble Freedom is named as Bunch. Requests for feedback from Green and Bunch were not answered.

Marble Freedom had more than $1.4 billion in assets at the end of April 2021, putting it in a position to be a key player in conservative causes for years to come.

According to Maguire, "this group is emblematic of the corrosion and the breakdown of our campaign finance system," which gives wealthy donors access to and influence over the system that is "far greater than any regular American can ever imagine" whether they are corporations or individual donors.