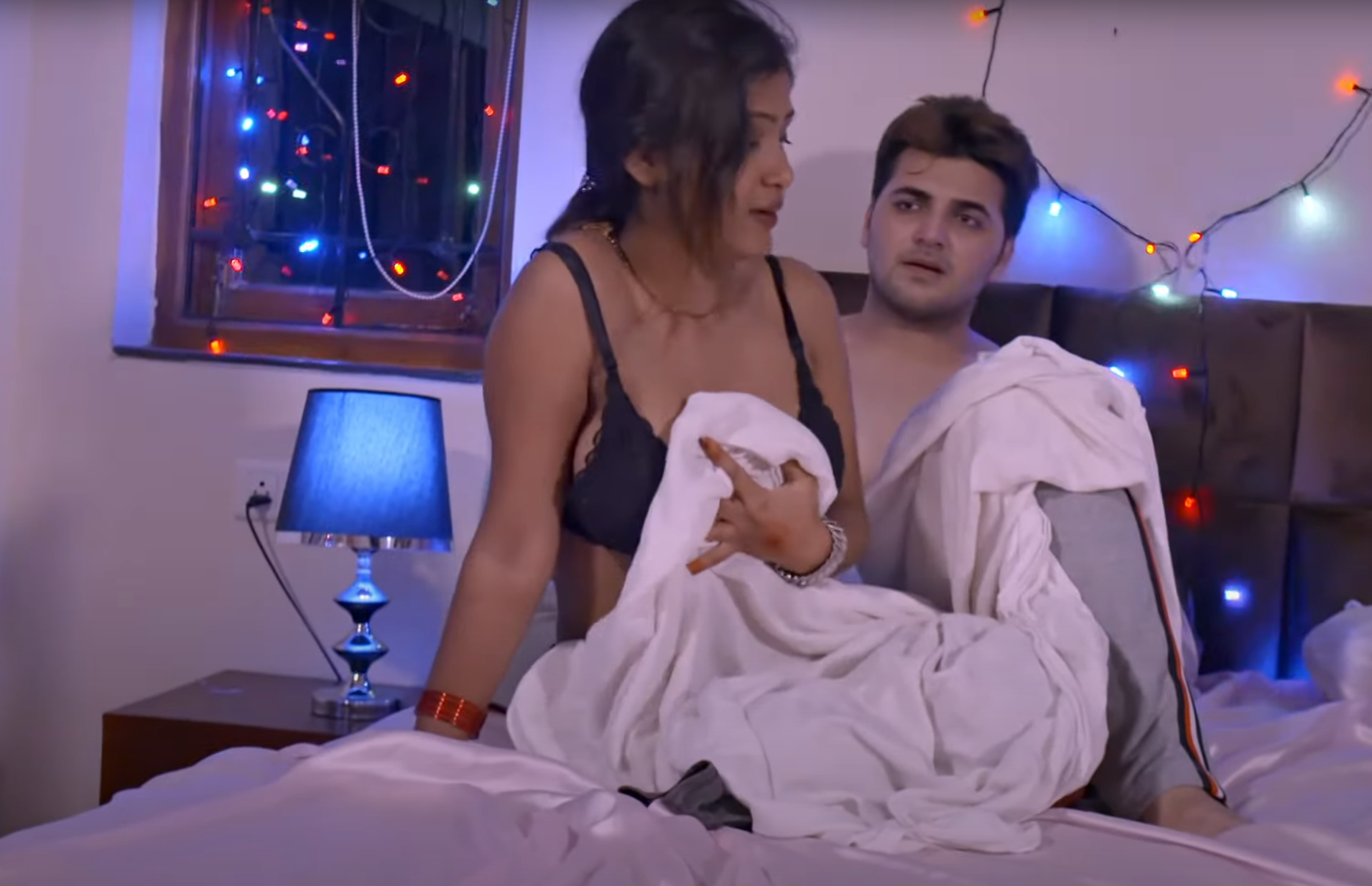 Don't worry if you are confused about this. We have listed the top 10 hot & sensational Indian adult web series. And these web series are of romance and intimacy along with solid thrillers and exciting stories. So, are you ready to have fun? Continue to read this article to feel the excitement and know about the adult web series openly talking about intimacy and pleasure.

You will understand how villagers and orthodox people from India are immensely affected by their dark seductive fantasies. And it is not just about men; even women can also go to the limit of atrocities to satisfy their sexual needs.

Wanna Have A Good Time

There are only three characters in this adult web series. Isn't it interesting!! Shilpa is a happily married woman who lives with her husband. They have their world in their home. They make love every time and have a fully satisfying sexual life. One day, Shilpa goes to her mother's house, so her husband drops her at a bus station.

Now Shilpa's husband is at home alone. He is bored and saw an ad in the newspaper with the "Wanna Have a Good Time" heading. There's a contact number below this headline, and he called. It is the callgirl supplier's number. And somehow, that supplier convinced Shilpa's husband for a callgirl. So, after a half-hour call girl rings a bell on his address.

It is because Divya Agarwal and Varun Sood are a real-life couple. And their chemistry comes to real on the screen. Ragini (Divya Agarwal) is a smart and stylish party girl who goes to Victoria Villa with her girl gang for her friend Varsha's bachelorette. Victoria Villa is an old mansion that turned into a luxurious hotel. And there are many dark secrets buried in the wall of this hotel.

Sunny Leone makes an appealing short cameo in the first episode, but it is impressive enough to impact the whole season. Ragini and her friends suspected something wrong with this villa. Simultaneously, Ragini falls in love with the hotel owner Varun Sood. It is a wonderful and thoroughly entertaining horror adult Hindi web series.

Have you ever imagined how would be the female version of Devdas? The answer is Dev DD. This web series is full of drama, attitude, and alcohol. It shows the modern female avatar of Devdas. This series follows the adventures of Devika. She falls in and out of lust, love, and betrayal. This series gives you a glimpse of the wild side of the female.

Ken Ghosh directed this series, and it has 11 episodes, and the main character is Devika Dharam Dwivedi. She is 22-year-old and lives in the orthodoxy society. In Jaipur, girls don't have much freedom, and people are very stereotype. But Devika doesn't give a damn about people. She is fearless, confident, and loud.

She smokes ganja, drinks rum, and explicitly express her emotions. She openly asks for sanitary pads and condoms at the chemist store, and she calls her boyfriends at her house without any fear. But once she falls in deep.

Devika refuses to become a typical Indian girl who has to stay at home and cook food. She wants to live her life with freedom, so she leaves her boyfriend and tries to find herself. But she went on the wrong track and started to drink and smoke.

It is a great web series to see with your boyfriend/girlfriend. The narrative of this web show is splendid. Ekta Kapoor and Ken Ghosh have done an extraordinary job to expose Devika's character. If you want to know about this story, go and watch Dev DD.

If you want to see the adult version of 'Sandwich' movie, Baby Come Naa is an adult web series like this. Shreyas Talpade performs the leading role of Aditya. Aditya is a rich boy and has two girlfriends, Sarah (Shefali Zariwala) and Sophie (Manasi Scott). So, he divided the week into two parts like Monday, Tuesday, and Wednesday with Sarah and remaining days with Sophie.

Sarah is a pea-brained girl with an almost zero sense of humour, and Sophie is also an unthoughtful mindless barbie. Aditya plays with both of them. Aditya's friend Yo Yo Bappi Singh (Kiku Sharda) helps him if he finds any problem. He doesn't want to leave any of his girlfriends and always tries to give both of them justice.

However, in the end, somehow, truth reveals, and he breaks both of her hearts. It is one of the best comedy adult Hindi web series. As it is on Mx Player, you can see this web series for free.

However, in her real-life, she compromises with multiple men. An actress on which these stories are based requested the director Ken Ghosh to avoid any similarities with herself. This show has broken all the stereotypes of the Indian television industry.

If you want to see the real cop-become-con story, Apharan will be the best web series to watch. This web series filmed in the Purwanchal. So, it is obvious that you will hear a lot of curse words. However, if I talk about this web series's story, it may be the best among all web series from this list.

And minister sends Rudra behind bars by falsely accused Rudra of killing his daughter. Now Rudra's bad days started. His wife sleeps with a hotel manager to earn money for survival. When Rudra comes out of jail, the whole society isn't accepting him. So, one woman offers him a lot of money, the only thing he has to do is kidnap a big industrialist's daughter.

Rudra kidnaps that girl, and it is pretty much real kidnapping. If you are looking for a real-life adventure, you should watch this Indian adult web show.

It is the story of four female friends, and all of them are struggling with various problems like romance work-life conflicts, anxieties, and ambitions. Among these two women are in their 30s, and others are in their 20s. They understand that their friendship is the only good thing that happened in their life.

The first season is in the list of the top three most-watched Amazon Original web series from India. These four friends soon go on vacation and drink a lot of tequila. They enjoy their life to the fullest. It shows a glimpse of real-life in metropolitan cities.

Love Lust & confusion is a comedy of mistakes and a modern love story with confusions, perplexities, desires, choices, and dilemmas. All of these things are mixed with an ensemble of lovable characters who illustrates today's confused youth. The story of this series revolves around the life of Poroma Sarkar. She came to Mumbai – the city opportunities to fulfil her dreams.

She wants to try her all options and explore the world. But she doesn't know that when she explores more, she becomes more confused. This show enlightens the element of polyamory and shows the perspective of millennials about it.

The plot of this web series revolves around the life of two people. They meet each other at the crossroads of their lives and follows a series of mischiefs and misadventures. They go on vacation together and then fight with each other. Their love and fight make this show more interesting. Today's millennials can resonate with this Romcom web series.

Spotlight is the true story of a famous Bollywood actress, Sana Sanyal. This web series depicts her life's up and down and unravels the naked truth of Bollywood life and limelights. This web series produced by famous movie director Vikram Bhatt. Tridha Choudhry performs the character of Sana. She is a young and highly ambitious girl for a village in India.

Her hunger for success paved her path to Bollywood, and she becomes a celebrity in a short time. However, she also releases that she is alone in her life. Her love, friends, and relatives are slowly outnumbered as she becomes more famous. She was lonely between the crowd of thousands.

Then she falls in love with his co-actor. This news spread like wildfire. Sana decides to come forward and confesses to having a relationship with the star actor. It is a great way to achieve more stardom, but she loses her love in this race. It is a great web series that depicts the loneliness behind the glamorous life of stars.

Hopefully, this article helps you to find the hot & sensational Hindi web series. It's a great way to enjoy your weekend by watching these adult web series. These shows easily resonate with reality, and this is the prime point to admire them. Comment below which Indian adult web series you will watch this weekend.