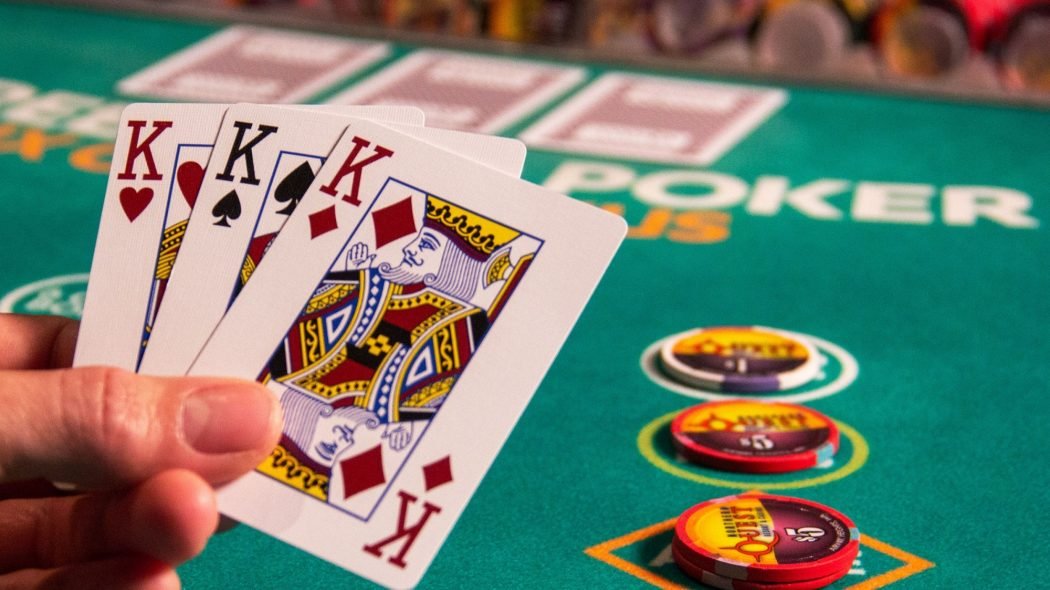 Almost all poker games require you to play against other people. 3 Card Poker, on the other hand, is a popular casino table game where you play against the house!

Almost all poker games include players competing against one another. 3 Card Poker, on the other hand, is a popular casino table game where you play against the house! Even if you see many individuals playing at the same time at the same table, don't be fooled; they're all playing their hands against the dealer's hand, not against each other.

3 Card Poker may pay you a lot of money if you make a hand of a certain value. It's also a simple and basic game to pick up.

Derek Webb invented the casino version of Three Card Poker in 1994, and it was copyrighted in 1997. Webb's aim was to develop a poker game that moved at the same pace as other table games. Webb was concerned that he had the right combination of three essential elements for any casino game: the game rules were simple to grasp, the rewards were high enough to attract players, and the house advantage was low enough that casino owners would be interested in adopting the game.

Webb founded Prime Table Games in order to sell the game in the United States and the United Kingdom. Because the UK had regulations against such a table game and Webb's application was not strong enough to convince regulators to make significant changes to their rules and regulations for a new game, the British Casino Association, now known as the National Casino Industry Forum (NSF), recommended that Webb gain some experience in the US first.

After failed sales presentations with casino owners in Reno, Las Vegas, and Atlantic City, Barry Morris, Vice President of Grand Casino Gulfport in Mississippi, was the first to embrace the game. Webb's offer to Morris included being on the floor to educate the dealers and keeping an eye on the game to ensure it was being played properly. In 2002, gambling laws in the United Kingdom were altered to enable the introduction of Three Card Poker.

Prime Table Games later demonstrated in a countersuit in 2007 that the 1999 PGIC lawsuit was founded on invalid patent claims, and PGIC settled for $20 million. Furthermore, Prime Table Games sued Shuffle Master in 2008, claiming, among other things, that Shuffle Master had hidden information that the PGIC claims were invalid prior to the 1999 acquisition; the case was eventually resolved for more than $2 million.

An Overview Of 3 Card Poker Methodologies

This section will teach you how to play 3 Card Poker at a casino and how to win at it.

One 52-card deck and betting chips are used in this casino game. During the current hand, automated shuffle machines are typically utilized to shuffle another deck of cards, allowing the game to go faster from hand to hand.

It's easy to win at 3 Card Poker: create the greatest 3-card poker hand you can! In contrast to Blackjack, there is no trading or drawing additional cards. It all boils down to the cards you're given at the outset.

You may either (1) expect to make a pair or better, or (2) have your hand rank higher than the dealer's, depending on how you wager.

Hand rankings in three-card poker are straightforward: To win, you must have the highest-ranking poker card (s) in your hand. It's worth noting that 3-card poker's ranks vary significantly from normal poker's.

From best to worst, these are the rankings:

You should schedule at least a few meals at the particularly delicious restaurants and reserve some energy for the world-class nightlife while creating your Vegas bucket list, but you should also make time to learn how to win at 3-card poker.

Table tennis is a popular sport. Three Card Poker is popular not just because it is entertaining, but also because it is simple to master. Three Card Poker combines two popular casino games from Las Vegas into one convenient package. You may not only compete with the dealer, but you can also win depending on the quality of your cards. The goal of the game is to create the greatest possible poker hand with just three cards.

In 3 Card Poker, You May Choose Between Two Betting Options

Ante: This is where you play your hand against the dealers in order to create the best poker hand possible. Pair Plus: With your hand, you'll try to create a pair or better. (This stake is unaffected by the dealer's hand.)

The wagering requirements vary per casino. If you wish to play a hand, some require you to put up an ante, while others, like the Pair Plus bet, are optional. Other casinos let you choose between the Ante and the Pair Plus.

Dealing: Each player in the hand, as well as the dealer, receives three cards face-down. You're just attempting to defeat the dealer (i.e. if you selected the "ante" betting option) in this game, similar to Blackjack. The cards of the other players have no bearing on the game you're playing.

The player's turn to act comes once they've received their cards. They may either "play" or "dispose of" of their hand. The dealer gets the player's initial ante as well as any Pair Plus bets if the player discards their hand.

If the player wants to continue playing, they must wager on "Play." The amount of the play bet must be equal to the ante employed by the player. These chips are often put after a player arranges his cards consecutively and then lays them face-down in the "play" area.

Winning and Payouts: After the player has shown his cards, the dealer will do the same. The hands are then compared, and any necessary funds are collected or given out.

The dealer's hand doesn't qualify to be "played" if it has a J-high high card or worse. All remaining players in the hand will win the amount equal to the "ante" bet, but their "play" bet will be pushed – that is, they will merely collect the chip (s) they initially placed, but they will not gain any more money (but they will not lose it either).

Because the "Pair Plus" wager is played separately if the player does not make a pair or better, the wager will either be collected or the matching profits will be given out. Regardless of the dealer's hand or whether the player wins or loses against the dealer, this is the outcome. Payout arrangements for these High Hands may be seen in the table below.

In 3 Card Poker, the best strategy is to play all hands with a value of Q-6-4 or better and fold the rest. Over the long run, this casino table game will always offer the house a 2% advantage.

However, depending on the payouts, the margins for Pair Plus and Ante Bonuses may vary significantly from location to location.